We’ve been talking about drawing by hand today and Larry remembered that some years ago, as part of an art project, he was hypnotised and asked to produce a drawing of a dwelling. Upon scouring the net, we found the artist and the project. Not only that, but we found photographic evidence: 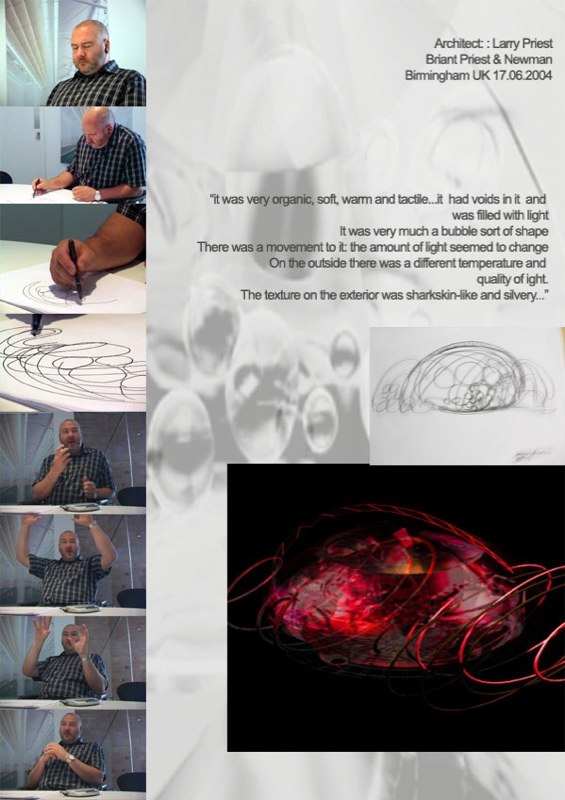 Marcos Lutyens, a Los Angeles-based artist and hypnotherapist, carried out the project as part of Fierce Festival’s Second Skin series in 2004. Unfortunately we didn’t manage to find the video of him drawing whilst under hypnosis (boo!) but the photos are fascinating.

The development of the project has involved architecture students and professionals from around the globe to form the basis for a new emergent approach to architecture, an architecture that is tied to the unconscious rather than predetermined codes, textbooks, fashion and architects’ dictatorial spaces.

As part of the initial workshop sessions for the project, Larry was hypnotised in the office, and produced the drawing seen in the images above. After the first session, he was asked if he would partake again, this time in front of an audience at Millennium Point as a performance piece. Unfortunately, he was unable to fall into a sufficiently hypnotic state on the second occasion, but the video of his first workshop drawing was shown at the exhibition. We’d really love to find that video.